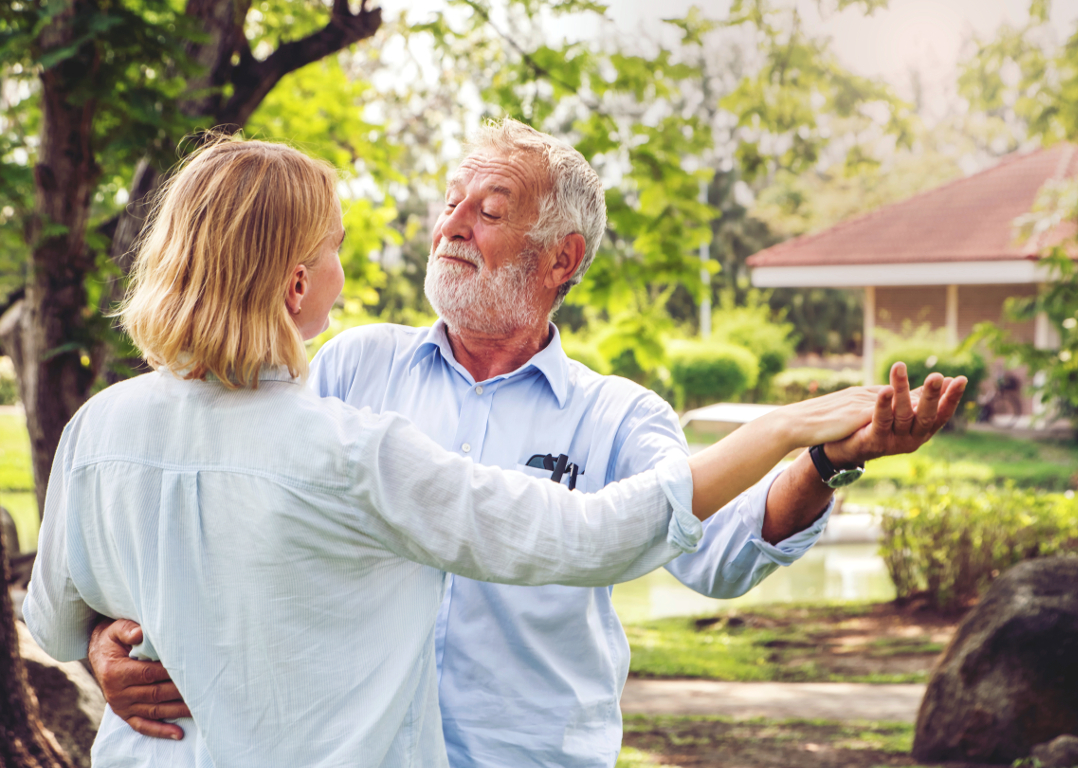 Dancing is the best prevention of senile dementia and a therapy for Parkinson’s disease. It is proven that dancing keeps you not only physically but also mentally fit!

A neuroscientist at Columbia University has discovered that dancing is basically a “win-win hobby”. By moving synchronised to music, different centers of the brain are addressed. Music stimulates the reward centers of the brain, while dancing itself activates the sensory and motor circuits.

A 2003 study by researchers at the Albert Einstein College of Medicine in New York found that dancing can significantly improve the functioning of the brain. The study observed the impact of leisure activities on dementia risk in the elderly. Researchers examined the effects of eleven different types of physical activity such as cycling, golf, swimming and tennis. However, only one of the activities – dancing – lowered participants’ risk of dementia.

Dancing keeps the brain active and can ward off senile dementia.

There was no association between pure physical activity and a reduced risk of dementia. People who trained a lot were still at risk of developing the disease.
However, there was a link between mental activity and a protective effect. The 21-year study discovered that people who regularly performed cognitive activity reduced the risk of dementia. The more the brain was required, the less likely dementia was.
The New England Journal of Medicine states “Reading, playing board games, playing musical instruments, and dancing were associated with a reduced risk of dementia.” According to the researchers, dancing involves both mental effort and social interaction, and this type of stimulation has contributed to reducing the risk of dementia.

Susanne Sorensen, head of research at the Alzheimer’s Society in the UK, added: “However, static mental exercise alone is not enough – the well being and improved general health that comes from many physical activities bring added benefits in preventing cardiovascular disease and falls.. ”

Reading, board games and playing musical instruments are good, but dancing has additional benefits!

Another 2012 study by Minot State University in North Dakota shows that dancing Zumba improves mood and certain cognitive skills such as visual recognition and decision-making. Other studies show that dancing helps to reduce stress, to increase the feel-good hormone serotonin and to develop new nerve cells, especially in regions involved in executive functions, long-term memory and spatial recognition.

According to the “On the Brain Newsletter” from Harvard Mahoney Neuroscience Institute, Daniel Tarsy, MD, an HMS professor of neurology and director of the Parkinson’s Disease and Movement Disorders Center at Beth Israel Deaconess Medical Center (BIDMC) says, music has a very stimulating effect on physical activity. He says that dancing can be considered as a form of rhythmic auditory stimulation (RAS). In this technique, patients are presented with a series of fixed rhythms and are encouraged to move to them. Studies of the effects that this technique has on patients with Parkinson’s or other motor disorders have found significant improvements in gait and upper extremity function in subjects. Although there have been no direct scientific comparisons of RAS with music or dance, Tarsy says that Parkinson’s people “speak and walk better when they have a rhythmic rhythm.” Dancing has therefore been found to treat patients with Parkinson’s disease.

German researchers, the neurologist Notger Müller from the Department of Neurology in Magdeburg and the sports scientists Anita Hökelmann and Katrin Rehfeld, have also dealt with the issue and have come to the following conclusion:

Exercise sprouts new nerve cells, but if they are not required by mental training, they atrophy again. Movement alone is not enough.

In a study, 40 people were examined, on average 68 years old. One half did fitness and strength exercises of all kinds, the other half did a special ambitious dance training, changing the program and the choreography every four weeks and having a variety of music. So the probands received new stimuli, learned playfully and were emotionally addressed.

After six months, the dance probands had significantly improved alertness, better balance and flexibility. The fitness probands increased only their alertness.
The brains of both groups had grown, albeit in different regions. Only the dancers, however, had an increase of nerve growth factor, which is important for the formation of nerve cells and for long-term memory. According to Müller, apparently new nerve cells have formed in the dancer’s brains.
Twelve months later, changes in verbal memory were detected in favor of the dancers. Therefore, Müller assumed that regular dance training delays mental decline in a possible mild dementia.

To give a résumé, dancing requires both your body and your brain, because you do many things at the same time:

This ensures the formation and preservation of important nerve cells, prevents the risk of dementia and treats movement disorders such as those that occur in Parkinson’s disease.

And by the way, regular dancing also increases your condition and musculature, can enrich the partnership, promote social skills and, of course, be fun!

Measures per minute (mpm), what is that?

A flash mob as a special gift
Scroll to top